First published in 1995, Robin Hobb’s first book in her fantasy series that will later on grow into a 16-book series is still widely loved by fantasy readers all over the world. This shows how timeless literature can be, but also specifically how well fantasy novels age. In this new century of contemporary books about relationships, police brutality, Muslim immigrants living in the West, and bisexuality, a lot of relevant and unique issues and themes can also be written between the lines in a fantasy novel. 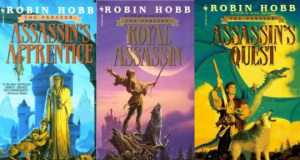 You all have probably heard me talking about how amazing Robin Hobb is as I was reading the final book in The Farseer Trilogy, Assassin’s Quest. The first book, Assassin’s Apprentice starts off with our main character and our narrator, FitzChivalry, who barely remembers his childhood until up to the day he was brought by his mother to Buckkeep, where he later on discovers that he is the bastard of the royal king in the country, Chivalry. He later on grew up with his mentor as a stableboy, and as he grew older he was recruited to become an assassin to the king, and discovers more about himself and the people around him. This book has the interesting medieval fantasy worlds as Lord of the Rings, the wonderful naivety of a child growing into a man as Harry Potter, and a slice of political intrigue as A Song of Ice and Fire. However what was so unique about this book and this world is Hobb’s very descriptive, sometimes unnecessary writing, and her ability to craft characters and character development. 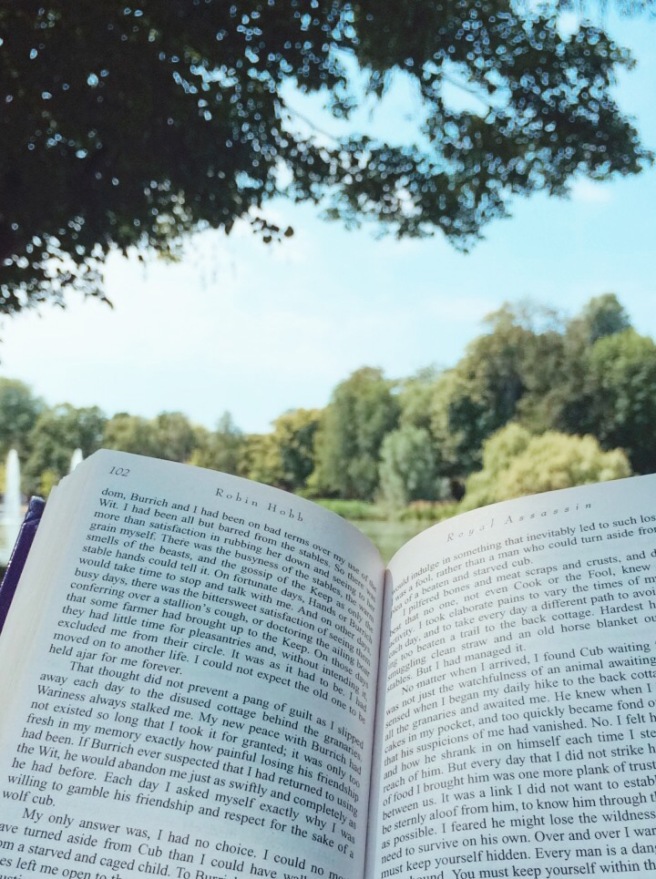 My love for this series did not grow very quickly – I finished reading the first book with a shrug and did not really feel the need to continue with the series for over a year. I thought the characters were interesting and the world unique, but didn’t think it very mind-blowing. Additionally I felt it a little too long for my liking. 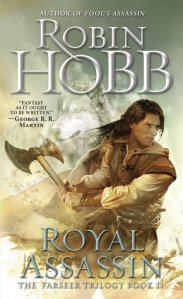 After reading the second book, Royal Assassin, almost a year ago, I also did not have the urge to immediately continue with the final book. Nonetheless, in the second book I really fell in love with the characters, especially Fitz himself, the people in the royal family, and other people living in the castle. I got more into the flow of Robin Hobb’s lyrical and sometimes very droning writing, and loved the magic system in the world. Check out my full review of the book here.

In this book as well we begin to really see Fitz grow into a man. There are a lot of themes and discussions in this book that really sparked my interest, but what struck me the most is the women in it. I admired all the women characters specifically in Royal Assassin, particularly Patience and Kettricken, who really shone in the third book as well. I fell deeply in love as well with Nighteyes, and his friendship with Fitz, as well as Fitz’s journey through his discovery of the Wit. 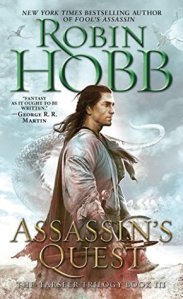 In the third and final book, Assassin’s Quest, where Fitz is a grown man with abilities of his own yet also various weaknesses, I fell hard in love with the whole series and could not stop reading it. I loved every page of it – scenes involving Fitz and Nighteyes, his friendship with the Fool, the way Fitz explores himself, his strengths and weaknesses, his talents and his future. It’s an amazing coming-of-age story that happens to be set in an amazing world.

A main problem I had with the story is about the antagonist: I felt like Regal in the whole series felt less like a man and more of a haunting figure that the main character never really meets. I also do not really understand his motivations and what made him a good character overall, and the ending was not very satisfying regarding how Regal’s conflicts were resolved.

I’ve heard mixed review of this whole series when I first started it, with most people saying that the second trilogy in the same world written by Hobb, the Liveship Traders series, will be much better. And so I’m excited to start that book in the near future. 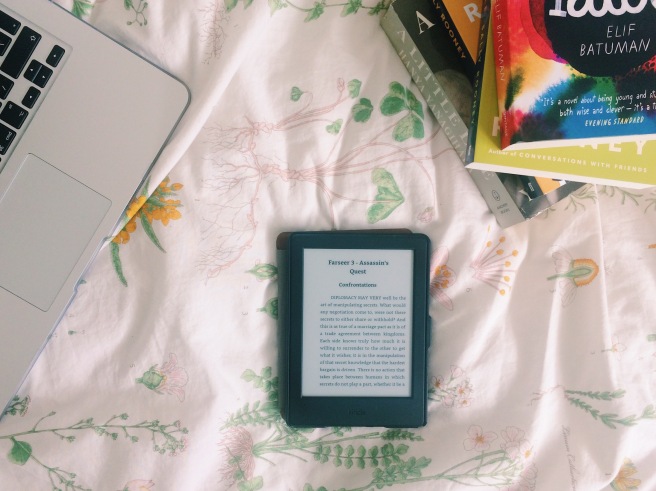 With all the political intrigue this series has, plus themes like the relationship of a human with animals and the many strengths women can have, especially with the loss of a child. Strong friendships between Fitz and people around him is also a premanent theme, as well as gender fluidity as expressed by The Fool, added with a hint of problems of drug addiction as we can find in King Shrewd. All these things feel both medieval and otherworldly but also relevant, and all these human and relatable issues (heartbreak, loving someone who doesn’t love you back, choosing between what you want and your duties, being forced to grow up faster than you should), all are intertwined in this beautifully written series. If you like long epic fantasies, this is totally for you. Definitely let me know in the comments down below if you’ve ever read anything by Robin Hobb, and your thoughts about it!

✨It’s that time of the month, for a monthly reading wrap up! ❄️ ⠀⠀⠀⠀⠀⠀⠀⠀⠀ I started the year with some meh books but ended the month of January with an incredible one 😍 ⠀⠀⠀⠀⠀⠀⠀⠀⠀ The books I read were: ⠀⠀⠀⠀⠀⠀⠀⠀⠀ » The Thousand-Dollar Tan Line — Rob Thomas » Imaginary City — Rain Chudori » The Art of Being Normal — Lisa Williamson » The Birthday — Carol Wyers » Pachinko — Min Jin Lee ⠀⠀⠀⠀⠀⠀⠀⠀⠀ What books did you read in January? 😊🌸 ⠀⠀⠀⠀⠀⠀⠀⠀⠀ ayundabhuwana.wordpress.com
🌺 Thank you @mist.and.books for tagging me in the #bouquetbooktag ! 🌼😘 ⠀⠀⠀⠀⠀⠀⠀⠀⠀ 🌻Peonies — book not talked about much: Hard Cider Abbey by K. P. Cecala ✨ 🌻Hydrangea — book with a beautiful cover: I Am, I Am, I Am by Maggie O’Farrell 🌻Ranunculus — book you couldn’t put down: Little Fires Everywhere by Celeste Ng 💕 🌻Sweet peas — book with a pleasant end: The Last Olympian by Rick Riordan 😊 🌻Gardenias — an emotional read: Pachinko by Min Jin Lee 😭 ⠀⠀⠀⠀⠀⠀⠀⠀⠀ Again thank you for the tag! ⠀⠀⠀⠀⠀⠀⠀⠀⠀ ayundabhuwana.wordpress.com ⠀⠀⠀⠀⠀⠀⠀⠀⠀
☕️ What are you loving, right here and now? ⠀⠀⠀⠀⠀⠀⠀⠀⠀ In the latest post on my blog I let you know what I’m currently reading, watching, and some arts and crafts projects I’m working on. ☺️ ⠀⠀⠀⠀⠀⠀⠀⠀⠀ Super happy that I’ve read 4 books in 2019 so far. I hope to reach my goal of 45 books or even more with this pace! 🤓 ⠀⠀⠀⠀⠀⠀⠀⠀⠀ ayundabhuwana.wordpress.com ⠀⠀⠀⠀⠀⠀⠀⠀⠀
💝 More library books love! 🙌 ⠀⠀⠀⠀⠀⠀⠀⠀⠀ Though last week I listed some of my fav books I borrowed from the library in 2018, in my latest blog post I talk about which books I’m very excited to pick up from the library 😱✨ ⠀⠀⠀⠀⠀⠀⠀⠀⠀ And what’s more exciting is that all the books are written by women authors! 👩🏻 Which is another goal I’m planning to achieve this year: to read more and more women authors from all over the world 💘 ⠀⠀⠀⠀⠀⠀⠀⠀⠀ I am also planning on making a Google spreadsheet and record the books I got from the library and see how much money I’ve saved by not buying them firsthand 😌💕 ⠀⠀⠀⠀⠀⠀⠀⠀⠀ On another note, I love the yarn colors all picked from @yarnandcolors & @wolplein 😍✨ Definitely one of the best quality color yarns I’ve ever worked with so far 💞 ⠀⠀⠀⠀⠀⠀⠀⠀⠀ ayundabhuwana.wordpress.com
🌙 The new year is about reflecting back on our previous year, and whether we achieved all our goals and resolutions 🍀 ⠀⠀⠀⠀⠀⠀⠀⠀⠀ In the beginning of 2018 I made a blog post about my reading goals and TBRs, and in my latest blog post I looked back upon these goals to see whether I’ve achieved them 💫 ⠀⠀⠀⠀⠀⠀⠀⠀⠀ Even so, this year I didn’t make any reading or blogging or life goals for the year. Because I feel like people change and things happen so much over the course of a year, and there’s no guarantee that the goals you made in the beginning of the year will resonate the same way at the end of that year 😌 ⠀⠀⠀⠀⠀⠀⠀⠀⠀ Did you achieve your own goals from 2018? Share it with me and check out the newest post in my blog to know about mine ☺️✨ ⠀⠀⠀⠀⠀⠀⠀⠀⠀⠀⠀⠀⠀⠀⠀⠀⠀ ayundabhuwana.wordpress.com
💛 It’s that time of the year for a 2018 reading in review! 🙌🎊 ⠀⠀⠀⠀⠀⠀⠀⠀⠀ In 2018 I read 42 books, with an average rating of 3.76. In my post I showed a lot of other details on my reading habits last year, including author gender, my favourite genres, book length, and longest books of the year. ⠀⠀⠀⠀⠀⠀⠀⠀⠀ I had a wonderful reading year in 2018, exploring loads of new authors and falling back in love with some old ones. 📚 I hope to read 45 books this year, three books more than last year’s. I also plan on reading better books that I love more and that touched me more, meaning increasing my average rating for my books in 2019 💕 ⠀⠀⠀⠀⠀⠀⠀⠀⠀ Check out my blog for the full post of my reading in review of 2018! ✨ ⠀⠀⠀⠀⠀⠀⠀⠀⠀ ayundabhuwana.wordpress.com ⠀⠀⠀⠀⠀⠀⠀⠀
🍃One of the best nonfiction books I’ve ever read! ⠀⠀⠀⠀⠀⠀⠀⠀⠀ Down and Out in Paris and London is written by the infamous George Orwell, and in this tiny little book he shares his experiences living broke and almost penniless in the two most famous cities in the world. 🌹 ⠀⠀⠀⠀⠀⠀⠀⠀⠀ His humour, wittiness, and amazing observations made this feel like a novel instead of a nonfiction book. 😍 And it gives a great insight into living with almost no money or food. 😅💖 ⠀⠀⠀⠀⠀⠀⠀⠀⠀ Bought in Shakespeare and Company in 2017.💓
🥀As the month of #NonfictionNovember is ending, I would like to share with you some of the #nonfiction books in my shelf. ⠀⠀⠀⠀⠀⠀⠀⠀⠀ My Life in Houses by Margaret Forster was a cute little memoir about the author’s life moving from house to house. Every chapter features an illustration of the house she lived in and her anecdotes while living there. 💖🏡 ⠀⠀⠀⠀⠀⠀⠀⠀⠀ It’s fun and touching and themes such as what do we really call home are discussed through her wonderful prose. 🌼 ⠀⠀⠀⠀⠀⠀⠀⠀⠀ And as someone who don’t often move houses, it’s interesting to see her point of view. ⠀⠀⠀⠀⠀⠀⠀⠀⠀ #books #bookstagram #bookish #booklover #reading #booklover #library #crochetlove #crochet #amigurumi #bookstagramindonesia #bookstack #autumnreads #bookphotography #literature #bibliophile #vscobooks #booksandbeans #booksandcrochet #mybookfeatures #bookcovers #houses #memoirs #monkey #laptop #flatlay #booksinbed #nonfictionbooks
What’s your favourite Pokemon? ⠀⠀⠀⠀⠀⠀⠀⠀⠀ I don’t really play the game(s) but my boyfriend loves it and requested that I make a crochet amigurumi of Dragonite! 🐉🤗 ⠀⠀⠀⠀⠀⠀⠀⠀⠀ This pattern by @studiocrafti Is just so adorable, I keep saying how cute it is as I am making it. 😊💖 ⠀⠀⠀⠀⠀⠀⠀⠀⠀ Pattern by @studiocrafti. Yarn by @katiayarns